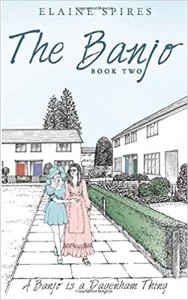 We are delighted to welcome Elaine Spires to the blog today to talk to us about her latest release. Elaine, could you tell us a little about it?

Thanks for inviting me.  My latest book is The Banjo Book Two and it follows on from The Banjo Book One which I wrote back in 2016.  Book One covers the years 1952-1971 and Book Two 1971-2020.  It’s set in Dagenham, a place that has undergone immense change over the last forty years and the Banjo Book Two takes a look at that change and how it affected people and their everyday lives.  It’s also about Community.

I am very proud to be a Dagenham Girl.  I had the most wonderful childhood growing up in Dagenham and was completely oblivious to the fact the town was known as Corned Beef City – as a dig at the working class population who lived there, insinuating all they could afford to eat was corned beef – and that much of the rest of the country considered us to be deprived.  It was quite the contrary.  Our council houses were well-built and roomy with gardens and plenty of ‘greens’ where we children played.  Our 1950s council house had central heating!  In amongst the many streets of the largest council estate in Europe (at the time) were pedestrianised cul-de-sacs with houses on three sides and a ‘green’ in the middle for children to play.  These cul-de-sacs were called banjos; the term is only used in Dagenham apparently.  And they had between 8 and 16 houses usually and so were little communities within the larger Community.  The Banjo itself is really the main character in both books.

How did you decide on the names for your characters?

The names were based on common first names I heard growing up and taken from family and friends and I researched common East End of London surnames – bear in mind – more than ninety per cent of the inhabitants had moved to Dagenham  from the East End slums after World War I – homes fit for heroes – and again in late 1940s and 1950s to rehouse those who’d been bombed out in WWII.

It took about a year because I had a lot of research to do as the book covered a span of almost 50 years.  I don’t do much re-writing to be honest.  I edit every few chapters.  Only once have I ever done a total rewrite – that was when I wrote Single All the Way (the third book in my Singles’ Series) when I deleted almost two hundred pages and started again.

Usually it’s a pyjamas day.  I am afraid to say I waste the first hour or so after getting up every day scrolling through SM but then I take myself in hand, tell myself I’ve procrastinated enough and set to.  I stop after a couple of hours to stretch and have some lunch and then plough on until any time between 4.30-9pm depending if I’m on a roll or not and how the story’s flowing.

The synopsis and the blurb for the back cover.  I bloody hate that part!  And promoting myself and my books.  I’m not very good at that.  The actual writing is a doddle compared to that.

As I said earlier I grew up in Dagenham so much of Book One was written from my own memories (even though I was a small child I remembered a lot and my mum was always talking about those years and so that kept it all alive for me.)  But  late 70s to mid 80s I lived abroad for a few years and so didn’t have the same clarity of what life in Dagenham had been like then.  So I asked friends and family.  Also there’s a fabulous group on Facebook called Memories of Dagenham and I put a call out for volunteers to answer a few questions and I was inundated with people’s memories.  They’re a great bunch of people.  I also Googled some years for local and national and international events then for the 90s onwards I was back in Dagenham again so I fell back on my own recollection of events. I also used the Study Centre at Valence House Museum, Dagenham.  It’s an amazing place and the number of resources they have is incredible and the staff are so helpful.  My heart swells with pride at coming from Dagenham every time I go there.  So much history.

After the run of a couple of plays I had written and produced was over.  The characters stayed in my head and I realised I had to turn them into books. (What’s Eating Me and Sweet Lady).  From then I was hooked and realised I just loved storytelling.  And when I started working as a tour manager for a singles’ tour operator I found myself surrounded by interesting people in an unusual situation – I mean, people who chose to go to the other side of the world with a bunch of strangers – and that gave me the idea for the Singles’ Series, which started out as just one book but is now a complete set of six books.

I self publish.  I tried a couple of well-known publishers but I don’t do rejection very well!  LOL.  No, seriously, I decided to go down the road to self-publishing after my first book and I’m glad I did, especially after getting a very snooty rejection letter for my second book from a very well-known publisher.  For a long time indie writers were the poor relations of the writing world but that has really changed in the last couple of years.  I like the freedom self-publishing gives me; I am very protective of my plots, my characters and my endings.  It would be nice to have a publishing house behind me when a new book comes out to help publicise it but I see really well-known writers having to push themselves on SM so really I don’t think I’m missing that much.

Queen Enid!  I adored her books and I devoured them.  My little working-class world was so far from Malory Towers where I yearned to go to school and play lacrosse because I didn’t have a clue what it was.  I only knew you played it with a stick.  At my school we played netball and rounders.  And I wanted to be one of the Famous Five or Secret Seven and go off and have an adventure with someone called Quentin and Julian.  I also loved Louisa May Alcott.  I read Little Women,  Good Wives, Little Men, Jo’s Boys.  When Beth died I sobbed and sobbed and thought my heart would break.  Thirty years later I went into my daughter’s bedroom to tuck her in and found her sobbing.  “Beth’s just died,” she said.

Just go for it!  Don’t waste time worrying whether or not you’re good enough just get your stories written and told.  And don’t worry about trends or other people’s opinions – write for yourself.

Always remember a one-star review is only ONE person’s opinion.

I’ve just put the finishing touches to a Christmas novella out on 1st December called You Never See Rainbows at Christmas.  And I’m researching for my next book which is going to be set in Dagenham, but at the end of WWI when it was still a small rural village with a 12th Century church and 16th Century pub and Medieval cottages and was surrounded by orchards and farms.  Interestingly, people like elizabeth Fry the prison reformer used to spend their holidays in Dagenham.  Her daughter Katherine wrote a great poem about the joys of spying Dagenham at the end of their road trip from London.  Three years after WWI ended  they broke ground on the Becontree Estate that would bring 90,000 people over the next ten years or so.  So, once again I’m writing about change. I want to look at the lives of my fictitious  villagers and how they were affected by this huge change that saw their village going from a tiny hamlet (first mentioned in 7th Century maps and documents) to a flourishing industrial town. 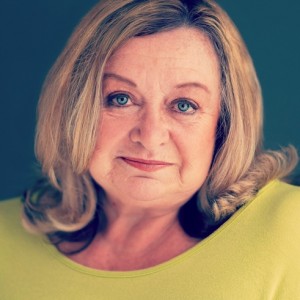 Elaine Spires is a diverse novelist as well as an award-winning playwright and actress. Extensive travelling and a background in education and tourism perfected Elaine’s keen eye for the quirky characteristics of people, captivating the humorous observations she now affectionately shares with the readers of her novels. She wrote her first book What’s Eating Me in 2010. It was originally a play, a one-woman show performed as a monologue with a child actor – Elena-Beth Carter playing Eileen as a child in the background and Elaine performed it on the London and Edinburgh fringes. She loved the character of loved Eileen so much that she decided to expand the story into a book. Her second novel was Singles’ Holiday, set on her beloved Antigua… the Caribbean at its most luscious, its most beautiful… silver sand, cobalt sky, warm, turquoise sea… and a bunch of complete strangers who only have one thing in common: they’re single! And her third novel Sweet Lady, again set in Antigua, will amaze you with a massive twist which goes to show that nothing is as it seems! When Elaine is not writing her ideas into her next book or play, she enjoys going to the theatre, visiting the cinema, eating out with her friends and she also loves to read!

Elaine was talking to Ruby Moon