Stranger in my bed – Karen King 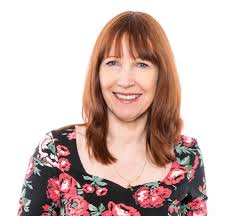 In honour of the RNA’s 60th Anniversary we’re interviewing some of the many volunteers who work hard behind the scenes to keep the organisation, website and blog running smoothly. Today, Karen King, the RNA blog co-ordinator, is in the Hot Seat. Karen usually writes romance novels but today her debut psychological thriller, The Stranger in My Bed, is published by Bookouture.

What inspired you to write a psychological thriller. Is it something you’ve been toying with for some time?

I like writing about relationships and have toyed with the idea of writing about the darker side of a relationship for some years.  The idea behind The Stranger in My Bed was triggered by someone remarking to me that they couldn’t understand why people stayed in an abusive relationship. It’s a common trait of abusers to deny all knowledge of the abuse, to say that their partner has imagined it, that they caused the injury themselves, to even pretend to other people they are the victim, and for the actual victim to never tell anyone, to cover up for the abuse. So I wondered whether if the abuser or their partner had amnesia and had no memory of the abuse, could they start again and build a better relationship? That’s the premise of The Stranger in My Bed.  Freya is about to leave her husband Phil after a terrible argument one night when he is involved in a serious car accident resulting in not being able to remember the last two years, the whole time of their marriage. Phil can only remember the blissfully happy days of their dating and honeymoon, not the terrible arguments that besotted their marriage.

After the magic of escaping into the world of romance or the children books you’ve written, was it a difficult transition to make.

Yes, I’ve found it quite difficult. With a romance the reader knows that the hero and heroine are going to get together in the end, it’s their emotional journey that’s important. The theme of The Stranger in My Bed, however, is a relationship that started with love and went badly wrong. I wanted to use the ‘unreliable narrator ‘ technique and keep the reader guessing which character was telling the truth so used different POVs to achieve this.  I had to be careful when writing in the ‘bad’ character’s POV, not to give away that they were the abuser. I used shorter chapters to add to the pace and also had to ensure that I brought in some twists and turns to the plot to add to the tension, and to hold back ‘reveals’ so as not to give everything away in the first couple of chapters, which meant switching some chapters around when it came to structural edits time! I have to admit that I found it a challenging book to write.

During the process of writing, Stranger in My Bed, did the characters play on your mind and keep you awake.

Yes, the characters were on my mind a lot. I wanted to portray a loving relationship that had gone wrong, rather that one of the characters being scheming and trapping the other into a marriage for devious reasons as sometimes happens in psychological thrillers. So there are some touching scenes with Freya and Phil, and some scenes of abuse and violence. I didn’t want the abusive scenes to be graphic, I always think that ‘less is more’, and wanted to concentrate on the emotional impact, and the confusion in both characters minds wondering if the other one was telling them the truth. Some of the scenes definitely played on my mind though and caused me a few disturbed nights.

Taking on the complex subject of domestic abuse was brave. Many people get frustrated and ask “why on earth didn’t the victim just leave,” or that “they would never put up with that, they’d just walk out.”or ” that would never happen.” But as you are aware domestic abuse isn’t that simple. How did you research Freya and Phil’s characters and was it uncomfortable at times?

The emotional and mental effect of domestic abuse is something that a lot of people who haven’t experienced it can’t understand, and often blame the victim for ‘allowing it to happen’ which is really unfair and damaging to them. This is a story I really wanted to tell, and it was important to me to try and get it right. Several things helped with the research for it, personal experience, talking to people who have been in abusive relationships, and also talking to my husband, an ex- policeman who was involved in protecting the women at a refuge and used to talk to them about their experiences. It was uncomfortable to write at times yes, but I wanted to be as true to the situation as I could.

I’ve always been a bit of a planner, mainly because when I started my writing career over thirty years ago, I wrote for teen magazines and children’s comics and had to send a synopsis of the story first for approval. Now I send a synopsis of the story I’m planning to my editor. She will make comments and we’ll flesh out the plot between us before I start writing it up. Then I get to know my characters, trawling Pinterest boards for photos of people that look like how I imagine my characters to be. Next, I write character profiles for them, noting their age, appearance, hobbies, family, likes and dislikes, so I can refer to it when writing the story. Then I’m good to go and start writing up the first draft. I don’t stop to edit unless I get stuck, I carry on writing until I reach the end, making notes in the margin on my document or on post-its of things I’m not sure about and want to check or fill in later.  When I get to the end of the story I leave it for a couple of days then start editing it. I read it through a couple of times before I send it to my editor.

So what’s next for you?

I’m presently writing another psychological thriller for Bookouture, which will be out in June 2021, and the first of three romance books for Headline. I’m excited about this, it’s called One Summer in Cornwall, and is set in the town of Port Medden where my bestselling The Cornish Hotel by the Sea is set, and features some of the characters from that book, as well as new ones. One Summer in Cornwall will be out on 1 April 2021. 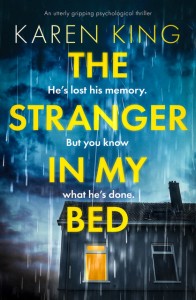 ‘We have a patient who has been involved in a serious accident. We believe he’s your husband.’

When Freya first met Phil, she thought he was the man of her dreams. He bought her roses every week, booked surprise trips to sun-soaked destinations, and showed her affection like she’d never experienced before. But over time the dream had become a violent nightmare. And now Freya is packing her bags, knowing it’s time she escaped their increasingly broken marriage.

But then Freya gets a visit from the police. Phil’s been in a horrific car crash and – as he comes around – it becomes clear that he remembers nothing since their blissful honeymoon two years before, back when their relationship was perfect. All he wants is to be happily married again.

Freya knows giving him another chance could be dangerous. But now he’s the one who needs her, it’s a chance to turn the tables, and to change the outcome of their relationship once and for all. After all, he will only know what she chooses to tell him…

But what really happened during those two years of marriage? And as they start over again, who is safe? And whose life is in danger?

Fans of The Girl on the Train, Behind Closed Doors and Date Night who are looking for a dark, gripping psychological thriller, with a final twist that will leave their jaw on the floor, will love The Stranger in My Bed.