We are delighted to announce the winners of our annual Industry Awards which includes four exciting new categories for 2021. The awards celebrate the hard work and talent of any person, group, or organisation who has championed the broad genre of romantic fiction in a positive way.

The new categories recognise the best Narrator, Named Cover Designer, Indie Editor, and Indie Champion of the Year. Along with the best Bookseller, Media Star, Agent, Publisher or Editor, Library or Librarian, and the Inclusion Award for championing inclusivity in romantic authorship and publishing, they spotlight the many professionals who promote and support romantic fiction.

The awards, which have been held for the eighth time, are highly respected in the UK publishing industry. The shortlistees are nominated by the full and associate membership of the Romantic Novelists’ Association, with the winners being chosen by a panel of judges.

Laura James, the RNA Industry Awards organiser, commented, “The statements accompanying each nomination, which the RNA membership provide, highlight the talent, care and excellence the industry professionals put into supporting and promoting romantic fiction. Compiling the shortlists was not easy. I look forward to celebrating the success of all the nominees, and offer my sincere congratulations to the Award winners in what was a bumper year.”

The winners of the ten awards were announced during the RNA’s Winter Party and Industry Awards ceremony, which was held at the Leonardo Royal Hotel London City, 8-14 Cooper’s Row, London EC3N 2BQ, on Thursday 28th October 2021.

The categories and winners are as follows (detailed information can be found at the end of the press release):

The Romantic Bookseller of the Year
Harbour Bookshop

Library or Librarian of the Year
Michelle Watson, Northumberland Libraries

Narrator of the Year
Annie Aldington

Indie Champion of the Year
Alliance of Independent Authors

Agent of the Year
Juliet Pickering

Publisher and / or Editor of the Year
Boldwood Books 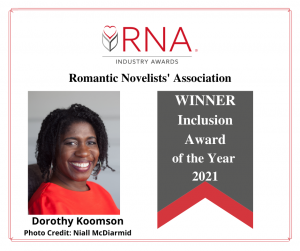 INCLUSION AWARD
Recognising the individual or organisation that has championed inclusivity in romantic authorship and publishing
Winner: Dorothy Koomson
Dorothy Koomson is an award-winning, global bestselling author of sixteen Sunday Times bestsellers. She was featured on the 2021 Powerlist as one of the most influential Black people in Britain and appeared in GQ Style as a Black British trailblazer. Dorothy uses her platform to support new writers and launched The Happy Author podcast to demystify the publishing industry. Her latest novel, I Know What You’ve Done (Headline) is coming out in paperback in December, and her next book, The Other Husband, is due to be published in July 2022.

THE ROMANTIC BOOKSELLER OF THE YEAR 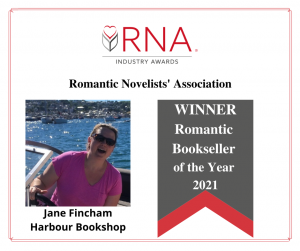 This award recognises booksellers promoting and championing romantic fiction in a positive and proactive way throughout the year
Winner: Harbour Bookshop
Jane Fincham has owned the Harbour Bookshop in Devon for five years. Bookshops have always been a natural home for her, and she doesn’t think she has ever been able to pass one anywhere in the world without going in and buying at least two books every time. Her bookshop is one of the first in the country to offer the entire British publishing catalogue online while still remaining true to their roots as a physical and customer-friendly bookshop. 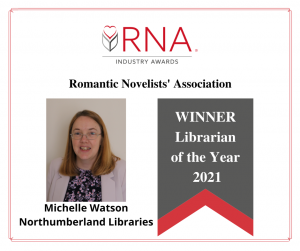 LIBRARY OR LIBRARIAN OF THE YEAR
This award recognises the important work that libraries and librarians do in supporting the romantic fiction genre, and the RNA in particular
Winner: Michelle Watson, Northumberland Libraries
Michelle Watson is a Reader Development Librarian with Northumberland County Council. She has worked there as a librarian since 2008; prior to this, she worked at Derwentside College, in the library, and with Durham County Council. She also worked in the library for the North East Religious Resource Centre in Durham. Michelle completed her degree at Stirling University, followed by an MSc in Information and Library Management with Northumbria University. She lives in Newcastle with her partner and daughter. 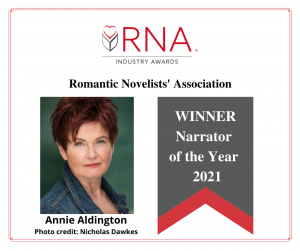 NARRATOR OF THE YEAR
This award is in recognition of the contribution that narrators of audiobooks have made to romantic fiction
Winner: Annie Aldington
Annie was born and bred in Lewisham, South London, and recorded her first audio book back in 1994. Since then she has become the voice of so many wonderful authors. Over the years she has carved a niche for herself as a voice of the old London. A London some of us remember from childhood or from parents and grandparents: The women talking on the doorstep; the key on a string behind the front door; children skidding along the street, balanced on a roller skate with a Beano Annual plonked on top. She says it is always a joy to bring these characters to life. Audio recording is a huge part of Annie’s acting life and is an area she greatly enjoys. 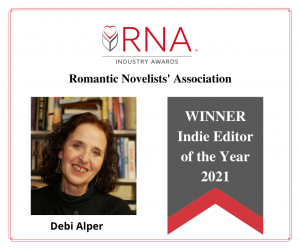 INDIE EDITOR OF THE YEAR
For an editor who has worked on an independently published novel that falls within the scope of romantic fiction, and who embraces the genre, supports writers to produce their best work, and is innovative, creative and visionary in the marketing and promotion of romantic fiction on every level
Winner: Debi Alper
Debi Alper is an author, freelance editor and creative writing tutor. Since 2006, Debi has spent her time helping other writers to perfect their novels through critiques, mentoring, Book Doctor sessions, and creative writing workshops. She also runs the phenomenally successful Jericho Writers’ Self-Edit Your Novel course, together with Emma Darwin. An astonishing one in four authors from the first five years of the course are now published. Debi also acts as a competition judge, is on the jury for the London Independent Story Prize and is a reader for the Costa Short Story Awards. 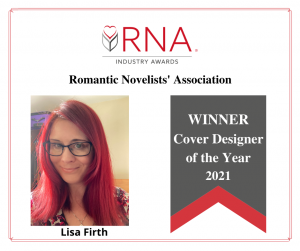 NAMED COVER DESIGNER OF THE YEAR
For the designer of novels published independently or traditionally, whose covers capture the spirit and heart of the genre
Winner: Lisa Firth
Lisa Firth is a freelance graphic designer specialising in book covers. A published author herself, she understands the importance of producing covers that are appealing, commercial and which perfectly encapsulate the story being told. Lisa’s design skills are entirely self-taught. She studied English Literature at university and worked for many years as a copy editor and proofreader before discovering a talent for digital design. She has been a professional designer for over ten years now, operating under her business name, Fully Booked Design (formerly Oliphant Publishing Services). She lives in Bingley with her partner Mark, plus Millie the border collie and Minky the cat: a terrible twosome who do their best to try to stop her getting any work done at all! 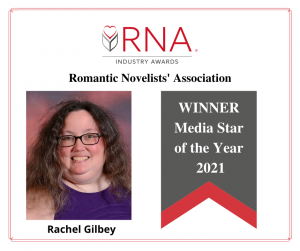 MEDIA STAR OF THE YEAR
This award recognises journalists, bloggers, publicists, and TV or radio presenters who have helped raise the profile of romance writing and / or the RNA in a positive way
Winner: Rachel Gilbey
Since starting her popular blog, Rachel’s Random Reads, over six years ago, Rachel Gilbey has discovered just how much the book community means to her, and has even created her own ideal job of organising blog tours. She loves reading a wide range of genres, but particularly enjoys contemporary romantic fiction. She lives in London, which she says is useful for attending book events and indulging in her passion for West End musical theatre. 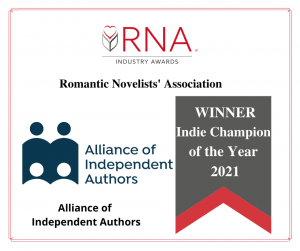 INDIE CHAMPION OF THE YEAR
For a person, group, organisation, association or company (such as a podcaster, promoter or advisor) who has made an outstanding contribution to indie romance publishing
Winner: Alliance of Independent Authors
The Alliance of Independent Authors (ALLi) is a professional business membership organisation for self-publishing authors. As a non-profit, they provide trusted advice, supportive guidance, and a range of resources within a welcoming community of authors and advisors. Founded in 2012 by Director, Orna Ross (a bestselling and award-winning independent novelist and poet), the organisation now has thousands of members worldwide. 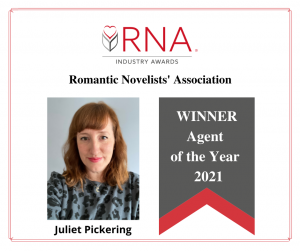 AGENT OF THE YEAR
For the literary agent who has striven to support, mentor, nurture and promote their authors’ careers, the genre in general, and the RNA in particular
Winner: Juliet Pickering
As an agent and director at Blake Friedmann Literary Agency, Juliet Pickering represents a broad range of fiction and non-fiction, covering stories of romance, family, loss and hope. Her authors include Sue Moorcroft, Bolu Babalola, Diane Abbott and Kerry Hudson. 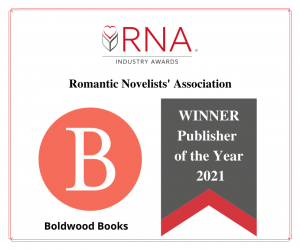 PUBLISHER AND / OR EDITOR OF THE YEAR
For an individual editor or a publishing house or imprint who embraces the genre, supports writers to produce their best work, and is innovative, creative, and visionary in the marketing and promotion of romantic fiction on every level
Winner: Boldwood Books
Boldwood Books is an award-winning independent global fiction publishing house. Launched in 2019, they have published over 160 titles, signed 60 authors and sold over 4 million books worldwide.