This month, we’re shining a spotlight on the 2021 RNA Industry Award nominees, starting with the Romantic Bookseller of the Year. This award recognises booksellers promoting and championing romantic fiction in a positive and proactive way throughout the year. 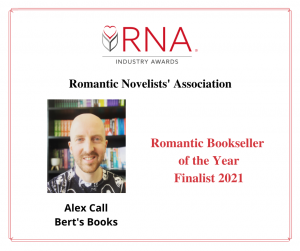 Bert’s Books
Alex Call, aka Bert, has been a bookseller in various guises since leaving school, first with some on the ground bookselling and then as a marketing manager for a nationwide chain. He started Bert’s Books in 2019 to prove that an online bookshop can still offer a personal service. Plans for a physical bookshop remain high on the agenda, but the website continues to grow in the meantime. As an avid reader and writer, Alex thinks books are an essential part of life.
Facebook: Bert’s Books
Twitter: @bertsbooks
Instagram: @bertsbooks 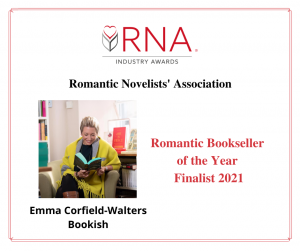 Bookish
Emma Corfield-Walters opened Bookish in the small Welsh market town of Crickhowell in 2010, and is well known for championing debut authors. She is also a director of the Crickhowell Literary Festival. Bookish won the Independent Bookshop of the Year award at the British Book Awards in 2020.
Facebook: Bookish
Twitter: @bookishcrick
Instagram: @bookishcrickhowell 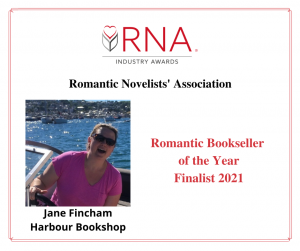 Harbour Bookshop
Jane Fincham has owned the Harbour Bookshop in Devon for 5 years. Bookshops have always been a natural home for her and she doesn’t think she has ever been able to pass one anywhere in the world without going in and buying at least two books every time. Her bookshop is one of the first in the country to offer the entire British publishing catalogue online while still remaining true to their roots as a physical and customer-friendly bookshop.
Facebook: Harbour Bookshop
Twitter: @harbourbookshop
Instagram: @harbourbookshop_devon