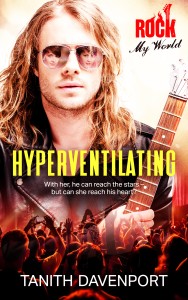 We are delighted to welcome Tanith Davenport to the blog today to talk about her new release, Hyperventilating. Tanith, could you tell us a little more about it?

I’d be delighted to. “Hyperventilating” is the first in the “Rock My World” series and follows my heroine Amber Blake, who is a make-up artist for rock band Puppetmaster. When the band are given a last-minute spot at a famous festival, a spot which could boost their sales, Amber offers to help them by developing new make-up for them, but instead finds herself falling into a relationship with lead singer Cassian – a relationship which later is threatened by an accident.

I love going to rock concerts (something I’ve missed during lockdown) and had been thinking of writing a story about a rock band on tour for some time – it was just a matter of deciding the best story. Generally when I name characters I’ll brainstorm first names that match them and then pick a surname that jumps out at me, which is how I named Amber. Cassian, on the other hand, went without a name for some time until I encountered a character with that name in a film my husband was watching.

As I’ve been working from home I managed to finish this more quickly than I usually do – it took me about six months. I usually edit as I go, as I’m always thinking of additional points to weave into the narrative. After I finish I let the story sit for a week so I can look over it with fresh eyes, then do another edit before submitting it.

As I have a day job, I’ve found working from home has made it much easier to write. I fit in an hour of writing before I log in to the office, then another hour over my lunch period. On weekends I’ll usually spend the first three hours of the day writing before taking a break, and I do prep work on paper in the evenings so I’m ready for the next day.

I’d wanted to be an author since childhood and first began writing in my teens, but I didn’t seriously start looking at publication until I was turning thirty, when I started a writing course where I was mentored by a woman who was a reader for the New Writers’ Scheme. She inspired me to join the scheme myself, which was how my debut novel “The Hand He Dealt” was published.

Just keep writing! I look back now at my teenage writing and cringe, because it was definitely not ready for publication, but you don’t get better unless you practise and it was all a learning experience. Plus I’ve made some use of those old stories by adapting characters for my current writing – many of them were worth sticking with even though the stories they were in were terrible.

I have just had the second story in the “Rock My World” series, “The Start of Something”, accepted and am working on the third, “I’m With The Band”. I’m also working on a standalone novella which will be an angels and demons story.

Thank you so much for coming to talk to us today. Good luck with the book and with the series. 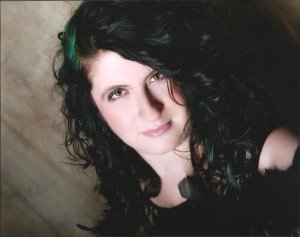 Tanith Davenport began writing erotica at the age of 27 by way of the Romantic Novelists’ Association New Writers’ Scheme. Her debut novel “The Hand He Dealt” was released by Totally Bound in June 2011 and was shortlisted for the Joan Hessayon Award for 2012.

Tanith has had short stories published by Naughty Nights Press and House of Erotica. She loves to travel and dreams of one day taking a driving tour of the United States, preferably in a classic 1950s pink Cadillac Eldorado.

Tanith’s idea of heaven is an Indian head massage with a Mojito at her side.

Where to find Hyperventilating

Keep in touch with Tanith:

Tanith was talking to Ruby Moon