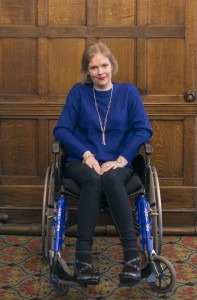 Claire Wade, is a finalist in the Inclusion Award category for the Romantic Novelists’ Association’s (RNA) annual Industry Awardsfor 2022. The awards celebrate the hard work and talent of any person, group or organisation who has championed the broad genre of romantic fiction in a positive way, with the Inclusion Award recognising the individual or organisation that has championed inclusivity in romantic authorship and publishing.

Claire is the author of The Choice (Orion, 2019), the winner of the Good Housekeeping Novel Competition and the East Anglian Book Award for Fiction. Claire has severe ME and was bedbound for six years; her only escape was through her imagination. She writes about people trying to break free from the constraints of their lives, a subject she’s deeply familiar with. Claire founded the group Authors with Disabilities and Chronic Illnesses (ADCI) to connect and support disabledauthors and work towards better access and inclusivity in the publishing industry.

She commented, ‘I’m delighted to be shortlisted for the Romantic Novelists’ Association’s Inclusion Award 2022. Navigating the publishing industry as a disabled person has been difficult and I have felt very isolated. That’s why I worked with the Society of Authors to form Authors with Disabilities and Chronic Illnesses (ADCI). In ADCI I’ve found an incredible, supportive community and we’re also changing the publishing industry, achieving more inclusivity and accessibility for disabled authors and raising disabled voices. As readers discover work by more diverse authors, it’sessential that disabled stories are told; by understanding those with different experiences we gain a better insight into the world we live in and can make it a kinder and more inclusive place.’