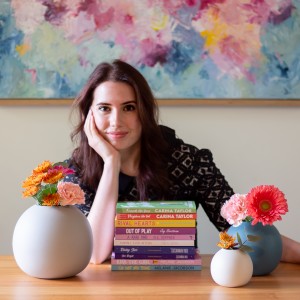 Melbourne book cover designer, Lucy Murphy, has won the Cover Designer of the Year award for the United Kingdom’s Romantic Novelists’ Association’s (RNA) annual Industry Awards for 2022. The awards celebrate the hard work and talent of any person, group or organisation who has championed the broad genre of romantic fiction in a positive way.

Lucy is the designer behind Cover Ever After, specialising in colourful, illustrated, romance book covers. She is genuinely excited about fonts, colours and layouts, loves to read, and uses way too many exclamation marks in her emails. Lucy has a Bachelor’s Degree in both Graphic Design and Marketing, which helps her create book covers that not only look pretty on the shelf but also attract the right target market and stand out in the crowd. Lucy lives in Melbourne, Australia, with her husband and Finnish Lapphund but works with authors all over the world.

She commented, ‘I am absolutely elated and honoured to have received the Romantic Novelists’ Association Cover Designer of the Year Award. It’s a great surprise and means so much to me! Thank you to the RNA and all the wonderful authors I work with!’

Sue Moorcroft, Head Judge for the RNA Industry Awards, also congratulated Lucy. ‘With such a wonderful set of shortlists it was always certain that the judges of this year’s Industry Awards would return an outstanding list of winners. Choosing between excellent candidates was an exacting task and I enjoyed being a part of the stimulating discussion around each and every nomination. My thanks to my fellow judges for the hard work and detailed research that went into the selection process, and to Laura James and Melanie Griffiths from the RNA for their efficient organisation. They made my job easy. Most of all – congratulations to the winners of these wonderful awards!’