Kendra Smith – Everything Has Changed 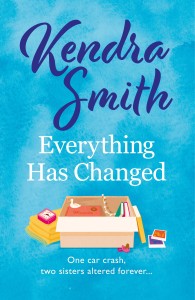 Today we welcome Kendra Smith, author of Everything Has Changed, to the blog.

What has been the inspiration behind the book? The inspiration behind Everything Has Changed was from a personal experience I had: a head on car crash which obviously affected me and if we set aside the physical injuries, it also left me thinking (as a novelist) ‘what if’. It’s the great game you can play in your head when you dwell on a story, see something in real life, wonder about that couple chatting in the corner of the café by the wall. ‘What if?’ What if those people are having an affair, what if they are ex’s meeting up? What if they are old school friends? What if he had wanted to marry her 15 years ago but walked away? What if the car hadn’t gone straight into me? What if I’d managed to swerve out the way? I played with these ideas and wondered about creating a heroine who lost her memory after an incident in the car. What if she woke up and couldn’t remember the last seven or so years? What if she was ‘someone else’? Someone she didn’t like? The inner and outer conflict would be great! What would happen? And so the germ of Everything Has Changed was born…

The accident (in the book) was a great plot point. And I felt able to write about it as enough time had lapsed from real events to turn it into something I could use in fiction. The book is about two sisters who need to re-write their past and move forward. But can they? I had great fun writing this novel. Luckily for me, things were the same, but for Vicky, our protagonist – or Victoria as she thinks she is – her whole life is turned upside down. Her adorable 10-year-old twins are now stroppy teenagers and her darling husband is more icy than Frosty the Snowman. Victoria has lost nearly seven years of her life, and her job is to find out why Everything Has Changed… what went wrong? Her sister, Lulu, is also facing her own demons and I weave a thread between the two to keep readers (I hope!) wanting to find out more.

What is your writing day like? Well, firstly, there is no normal! Two years ago we were lucky enough to bring a little Springerdoodle (to the non dog-owners, this fluff ball is a mix between a springer spaniel and toy poodle) into our lives and since then, well, with three children as well, it’s always busy: from looking for his lead, taking him for a walk, doing the school run, and fitting in writing around that.  After school runs and doing errands and finding ‘the other shin pad’ and perhaps brining that to school, I will be met with a barking fluffy madness at the door – aka the dog. I take him for a decent walk and then it’s time to think about writing.  And this could be any manner of things like my actual book, or a synopsis, or guest posts or blog. I also run writing workshops and so some of my time is spent doing research for that. There are always minor interruptions such as, ‘what’s for lunch?’ (if it’s half term), or a text from son-at-uni about whites and coloureds. This term, we are at 25 texts alone just about his laundry.

I’m a big believer in word counts. As they say, you can’t edit a blank page, so to get the story down is the hard part, and then the editing begins. Word counts will spur me on to sprint to the finish line – that and a supply of White Americanos.

When did you realise you wanted to be an author?  I didn’t wake up one morning and realise I wanted to be an author – however I have always worked with words – from running the student newspaper at university, to being a journalist and then to finally penning a novel as I worked from home when the kids were babies. I did have a ‘eureka’ moment when I read Allison Pearson’s ‘I Don’t Know How She Does It’, however. Not only did the book seem to ‘talk’ to me, but I also thought: ‘I want to do this.’ I wanted to build a fictional world and let the readers wander around in a place that I created.

Who were your favourite childhood authors? I read all the Enid Blyton books and got lost in the Famous Five. I also devoured the whole Nancy Drew (and Hardy Boys) series which were actually written by various ghost-writers under the pseudonym Carolyn Keene. When I was a bit older, it was Jilly Cooper who had me hooked.  Who remembers ‘Imogen’. Or ‘Octavia’?

If you could give your younger writing self any advice, what would it be? To enjoy your writing. And that it’s OK to make things up! As a journalist for years, I was trained to check facts, to query everything to the point that I would even look at my own by-line, scratch my head and think, ‘Now, is that spelt correctly?’ So when I started writing fiction, this constrained me a bit. Today, I go with the flow a lot more and really enjoy embellishing the story and seeing ‘where my mind takes me’ – this is something you do have to keep doing and to ‘let’ yourself be free enough to just see where the writing goes sometimes.

Can you tell us what you’re working on now? Yes. I am working on novel number five… it’s still in the early stages where characters are shouting to be heard in my head, I’m world -building and scribbling things in my notebook, but it is taking some shape and I can ‘see’ it all in my head, like a movie. It’s about two women who help each other with ‘life lessons’, one is trying to rebuild her life, and the other – because of dementia – is trying to remember what her life actually was. 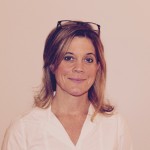 Kendra was born in Singapore but educated at boarding school in Scotland and then onto university in Aberdeen. Her list of achievements range from being an aerobics teacher in the 90s, climbing the highest mountain in SE Asia, working in women’s magazines (including OK! in London, at the BBC, and Cosmopolitan in Sydney). She currently lives in Surrey and spends her time looking for odd socks or chewed tennis balls – and other random duties associated with being the mother of three boys and a Springerdoodle. With dual British-Australian nationality, she has lived and worked in both Sydney and London. She has been a writer and journalist for over 20 years. She now writes contemporary women’s fiction and this is her fourth novel. Kendra can move from keyboard to cooker with ease. She can rustle up a 100,000 word novel, but finds it hard not to burn boiled eggs. Find her on Twitter @KendraAuthor or on Facebook as Kendra Smith Author