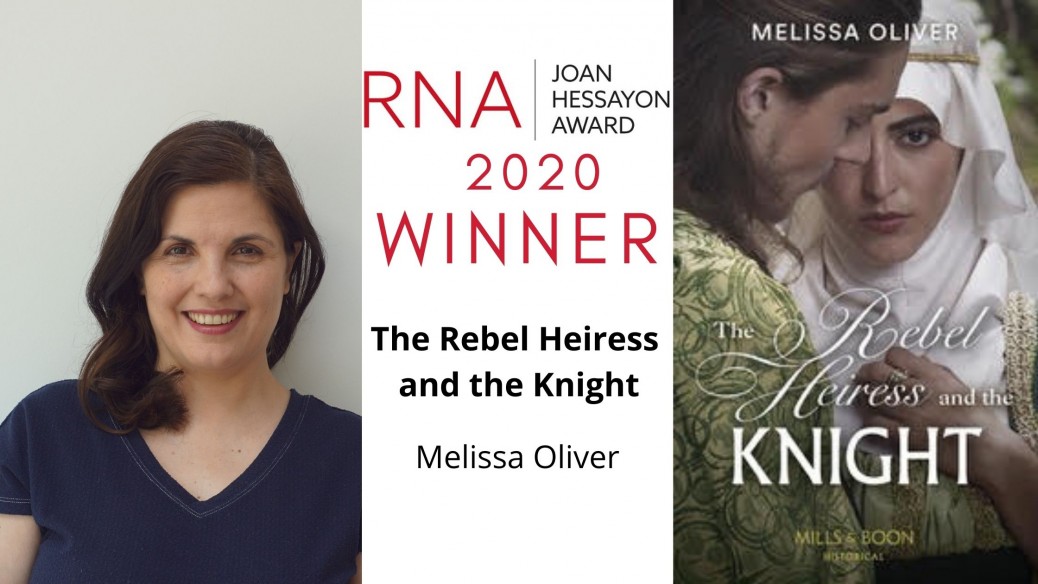 Saturday 5th September 2020: Author Melissa Oliver has triumphed with her debut novel The Rebel Heiress and the Knight, published by Mills and Boon Historical, for which she has been awarded The Romantic Novelists’ Association’s (RNA) prestigious Joan Hessayon Award for new writers. Melissa, from New Malden, Surrey, will also receive a cheque for £1,000.

The Joan Hessayon Award is generously sponsored by gardening expert Dr David Hessayon OBE, in honour of his late wife, Joan, who was a longstanding member of the RNA and a great supporter of its New Writers’ Scheme.

The judges for the award, which included RNA Chair Alison May, Vice Chair Imogen Howson, Rhoda Baxter, author of contemporary romance and Chair of Authors North, and Thorne Ryan, Commissioning Editor for Hodder and Stoughton, were unanimous in their decision to crown The Rebel Heiress and the Knight the winner. They praised the novel’s ‘very real characters’ and enjoyed how ‘the history was beautifully woven into the story’, calling it ‘an excellent example of its genre’ and ‘a very strong debut’.

The book was selected from a list of 21 contenders, all authors whose debut novels have been accepted for publication after passing through the Romantic Novelists’ Association New Writers’ Scheme. Each year 300 places are offered to unpublished writers in the romantic fiction genre. As part of the scheme, they can submit a complete manuscript for critique by one of the Association’s published authors as well as attend RNA events which offer opportunities to meet and network with publishers, agents and other published authors.

This year’s debuts show the wide range of stories encompassed by the romance genre, from the ever-popular romantic comedies, to fairy tale romance, romantic suspense, historical stories and paranormal thrills. From the house just down the street to the sun-soaked beaches of Italy and that different world that is the past, these books deal with themes we all recognise and hold close to our hearts.

Melissa Oliver wanted to write a medieval romance set against a backdrop of real historical events, and the bitter divisions between King John and the Barons in 1215 provided the perfect element of intrigue, adventure and excitement. There’s also a nod to the legend of Robin Hood, which some historians believe took inspiration from the real-life story of Fulk FitzWarin III.

In The Rebel Heiress and the Knight, widow Eleanor of Tallany Castle knows her people are broken by the taxes demanded by King John. So when she’s ordered to marry Hugh de Villiers, a knight loyal to the king, she’s furious—even if he is handsome. As gallant Hugh begins to heal the scars of Eleanor’s abusive first marriage, she’s even more determined to keep her secret: she is the outlaw the king wants to send to the gallows.

RNA Chair, Alison May, commented, ‘The Rebel Heiress and the Knight is a fantastic debut, combining action, intrigue and engaging emotion. In an incredibly strong year for the Joan Hessayon Award, with an unprecedented number of contenders, choosing a winner was a real challenge, but Melissa Oliver’s debut blew us away with the quality of the writing and the emotional depth of the romance depicted’.

Stephanie Harte, Risking It All, Aria

Kirsten Hesketh, Another Us, Canelo

Lynn Johnson, The Girl from the Workhouse, Hera

Lucy Keeling, Make it up to you, Choc Lit

Melissa Oliver, The Rebel Heiress and the Knight, Mills and Boon Historical

Jacqueline Rohen, How to Marry Your Husband, Arrow

Manuscripts submitted under the scheme are from unpublished authors and are read by an experienced writer or editor who provides invaluable feedback. Any manuscript that is subsequently published as a debut novel is eligible for the Joan Hessayon Award. All eligible books are judged by a panel of experienced RNA members who are already published authors, and this year the final round judges were Rhoda Baxter, author of contemporary romance and Chair of Authors North, and Thorne Ryan, Commissioning Editor for Hodder and Stoughton.